Antheil's once-futuristic Ballet mécanique is an ode to yesterday's technology. 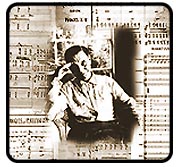 THERE IS A particular feeling history gives you when you get close to it. Jacobson and I felt it, in a small way, Thursday night when we pulled our chairs up to the warm glow of the Ozark-5000 PC with Gizmosonic Micro-Speakers in my study and tuned in to a live Webcast.

The Webcast – coordinated by University of Massachusetts Lowell professor Paul Lehrman – was of the first full-instrument performance of Georges Antheil's 1924 symphony Ballet pour instruments mécaniques et percussion. Slightly better known as Ballet mécanique, it was written for 16 player pianos, two grand pianos played by humans, three xylophones, four bass drums, a gong, three airplane propellers, seven electric bells, and a siren. Not surprisingly, it had the reputation – largely theoretical – of being the loudest piece of symphonic music ever written.

The performance was the theory's proof – despite the small speakers, it was loud indeed. I'm a fan of noise. I hear noise all the time. In the streets, in the theater, on the Muni, great white and silver sheets of noise banging and shrieking like waves of force through the air, patterns of ridges like jackhammers and road pounders, white dots like glasses breaking, big ropes of noise settling into my head at night right before sleep. I love noise and I loved Ballet mécanique. Here was a man's mind in which disordered sound had its own internal truth and, with a little ordering, could be made to comment on, as Jacobson pointed out, the tedium of the day survived in modern cities, on war, on sex and death, and on the transcendence, however transient, of the individual spirit.

The piece started more innocuously than I had expected, like a bus warming up, an odd, though not shocking, sound to hear at a symphony. Then gears clashed and the buzzing began, 18 pianos washing layers of sound into one another, at times all hitting the same notes at once, sometimes 1,600 different notes. At the zenith of the roar, the noise settled into fractal patterns, like a factory or a freeway, breaking off occasionally to absolute silence.

Then the bells would ring, the siren would sound, the gong would boom, and the 3,000 time changes in the piece would make themselves known. The constant throughout the piece was the unimportant little workaday xylophone melody that would surface from the nap of noise, going under again like a drop stitch. Again and again this little melody would arise, occasionally govern, and then be swallowed up again.

As the piece chugged to a clangorous stop, swallowed up in the ocean of 1,000 madly applauding live audience members at the university's Durgin Hall, we switched off the bun-warmer of a computer, acidic with the moment, and just stood in the middle of the study feeling the noise wash off us.

Antheil's intentions may be known in the end only by him, but I'm here to tell you that something happened and I was made more present by it. In that moment I understood how an individual could stand out, however transient and temporary, above the din.

Like much of history in the twilight of the 20th century, the piece of it we witnessed was ironic. Lehrman coordinated the use of modern technology to perform an old piece of music, so avant when composed that the technology did not exist to play it, a piece whose insistent rhythms, atonality, and just plain noisiness make it more contemporary now than it would have been then. Additionally, Lehrman used MIDI and a computer to control real pianos, which were so loud that the two humans had to play MIDI pianos.

According to Lehrman, Antheil had hoped to use machines to create a direct link between the composer and the audience. But in this performance, the players still made a difference. The performance, as noisy and mechanized as it was, was still music.

"[Conductor] Jeffrey Fischer and the students and soloists found the music in there," Lehrman said. "It could have been played much flatter."

And let's not forget that as much as it was indebted to the mechanization of the world, Ballet mécanique was written by a human. What Antheil meant, if anything, is up for debate, but what's certain is its effect on a modern audience. Our age, like Antheil's, is one that thrills again with each new technology. There is a feeling – as overhyped and twice as millennial – that every new piece of software, every little gadget, is the new Jesus, come to save mankind.

"This was an optimistic time," Lehrman said about Antheil's. "At that time people did not have negative views of mechanization."

Where our time differs, however, is in experience. Even if we blinker ourselves, we've seen the damage technology can do in the hands of sophisticated apes. Every time a streetcar purees an old lady in the Sunset or we hear of eight people being airlifted out of a wreck with a "jackknifed big-rig" on 280, every time a new lake becomes poisonous enough to burn the chrome off a bike frame or rates of asthma quadruple near a factory, the aura of mechanization dims a little. So Antheil's piece, which may have been pure new happy family fun in 1924, has a Gothic undertone in 1999.

I had been in the presence of Great Art (unqualified and non-ironic) only three times prior to Thursday – Athol Fugard's Road to Mecca at the Intiman Theatre in Seattle, my friend Gabriel's soleá at Kiki's bar in Granada, Spain, and Pablo Picasso's Sueño y mentira de Franco at the Legion of Honor. I add the first performance of Antheil's Ballet mécanique to that list. In an age of small beer, sometimes only whisky will do.

Antheil's Ballet mécanique will be performed April 2, 2000, by the American Composers Orchestra (americancomposers.org/concerts.htm), Carnegie Hall, and in June, in a concert celebrating the 100th anniversary of Antheil's birth, at the Other Minds Festival (www.otherminds.org) in collaboration with the San Francisco Symphony.